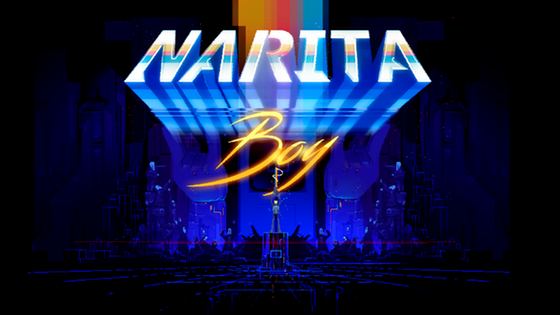 Explore and fight in a retro futuristic world. Swim deep into an oneiric, poetic and unique experience across dimensional planes

Latest Updates from Our Project:

We are super happy with the feedback that we are getting from the demo and the announcement trailer. Gamers worldwide are connecting with the Trichroma, wielding the Techno-Sword and starting to be ready to liberate the Digital Kingdom from the Stallion invasion!

To celebrate our Narita Boy announcement, we're creating a video of YOU - the fans - singing/lip syncing along to 'Saving the World' - the first released track from the official Narita Boy soundtrack!

It's Karaoke time in the Digital Kingdom! What's better than a music video featuring our amazing community and long-term backers?! Analogue vibes from the soundtrack are spreading globally, and we would be grateful if you could participate in this movement.

What do you need to do?

Submit your video URL in this form by 25th February to be immortalised within the official karaoke video! http://bit.ly/NaritaBoySTW


Check out the Saving the World, and learn the lyrics: https://www.youtube.com/watch?v=u62-hQaf7ss

Let us know if you've posted your video on social media by using #SavingTheArcadeWorld - we'd love to share it!

If you prefer click on the video to start your Karaoke session:

We would love to star you in the upcoming Saving the World video. Last week we posted a YouTube video with the song's lyrics, and we'd love for you to record yourself singing along.

Our dream is to have our backers unite under the #SavingTheArcadeWorld banner by singing along to Save the World. Be creative, be crazy, be retro, be 80s, be Narita Boy or Girl or whatever you want to be. Pump up the volume and let the Narita vibes merge with your code.

For us, this video is a way to acknowledge your generosity, support a good cause and to thank you once again for making this game possible.

May the trichrome flow through your veins and inspire your creativity!

Are you hearing that humming?

Are you feeling a tingling in the palms of your hands?

Are you relishing in post-fever cosmovision dreams?

So have we! We are with you… so close… Together we are gonna rise to the Digital Kingdom!

Today we are thrilled to announce that we are working closely with Team17 who are equally excited to wield the Techno-sword with us.  With their help, we can share the Digital Kingdom with so many more of our brothers and sisters around the world and bring the Trichroma to a home near you!

We also want to invite you all to play a demo of Narita Boy, which is available right now for a limited time during this week’s Steam Festival. Yup! That’s right, you have until the 9th February to get your hands on the first ever public build. Psst, not even influencers or press have seen this demo!

One last thing we’d like to share, and this one comes from a deep-routed tie to our development of Narita Boy over the past years. If it wasn’t for the arcade machines back in the glory days of the 80s then it’s likely that games wouldn’t be the same as they are today, if in existence at all.

We really do hope that you enjoy our new trailer, our ‘byte-sized’ demo, and our guarantee to deliver you all to the Digital Kingdom later this spring.

Thanks again and keep connected. There is more to come!

May the trichroma shine upon your way,


P.S. If you record yourself singing to this karaoke track

Dear Backers, step by step we are getting closer:


Narita Boy is participating in the Steam Festival on February 3rd! This will be your first chance to experience the wonderful sounds & visuals of the Digital Kingdom


YOU are the Chosen One — YOU are Narita Boy!


Have a nice day to everyone!

Today is a momentous day for Narita Boy. We have a Steam Store page that is live right now! https://store.steampowered.com/app/1069530/Narita_Boy/

Even though you’ve backed the project, please still wishlist Narita Boy. From what we’re told the way Steam analytics work, the more wishlists we have, the more visibility we will get! So, your support goes a long way!

Please also share our store page with friends and family. We appreciate all your help as we start our journey together, heading for release. Oh, and follow us on our Twitter https://twitter.com/studiokobagame if you don’t already.


We also we invite to check our new website


May the Trichroma be with you all,


We’re warmed to have had such a positive response to our post last week. We’d like to apologise again that it took so long for us to respond, and hopefully, this message is evident that we’re improving our communications. After all, you guys are what makes the Trichroma real!


We want to respond to several requests for a change in pledge from PC version to Console versions. We are sorry to inform you that we won’t be able to make these changes. The primary reason we’re not able to make this change is that the Kickstarter campaign fell short of reaching the console porting stretch goals. The multiplatform release has been possible thanks to our partnership with a publisher, that was acquired after the Kickstarter campaign. No changes have been made to our offering of the DRM-free or Steam versions as previously promised.


We also want to be more transparent about why we’ve not been able to hit our expected release date. Before we get to that explanation, we wanted to express our deepest apologies that we weren’t able to meet the expected deadline initially set in our Kickstarter campaign.


Internal team issues lead to us having to restructure the team and hire new team members. A restructure is a big undertaking we were ill-prepared to handle. For a while it appeared like Narita Boy would not see the light of day! We made some rookie mistakes. We also tackled significant economic struggles. However, thanks to financial support from our families, our publisher’s expertise and an incredible new development team, we were able to tackle the situation. We had to work fast, with the vast calendar and budget constraints, while simultaneously putting the quality of the game first.


As you can see, we’ve had a lot on our plates the past few years. In hindsight, we believe we could have made better choices and communicated with you guys more transparently. However, we are proud of the state in which Narita Boy is currently in.


In a previous update, we said that “the game content will be finished in the coming weeks”. Admittedly this was our excitement spilling over into our post to you. We’ll try and avoid this going forward. To explain what we’ve done since then, we had to run usability tests, implement their feedback, improve some areas, fix bugs, audio post-production, testing and more testing. Our next steps are focused on polishing Narita Boy and working with our partner to make the best possible splash (2021 is going to be exciting!).

We expect to be able to confirm the exact release date soon!

We want to thank all our backers that have shown their patience, understanding and support.


May the Trichroma be with you all,